Bourbon is a vibrant community located in Marshall County, Indiana. The center of town is situated at the junction of Indiana State Road 331 and the old Lincoln Highway. The people of Bourbon are proud of their rich and colorful history. We hope that you will visit our community soon and see it for yourself!

Before the earliest settlers came from Bourbon County, Kentucky, in 1836 the Bourbon area was the land of the Potawatomi Indians. Old surveys in the county surveyor's office show the Indian trails, including one that runs from the Potawatomi Park village site in the South Bend area through the present town of Bourbon. Two of the old trails ran through the woods between 14B and 15th Roads east of IN 331. Between these trails (traces of one which can still be seen) is a natural amphitheater, which the old-timers said, was where the Indians held their council meetings.

Bourbon Township was organized in 1840, including what is now Tippecanoe Township. In 1842, Tippecanoe became a separate township. In anticipation of the arrival of the railroad, the town of Bourbon was laid out in 1853. The railroad arrived in 1856; the town incorporated in 1865. 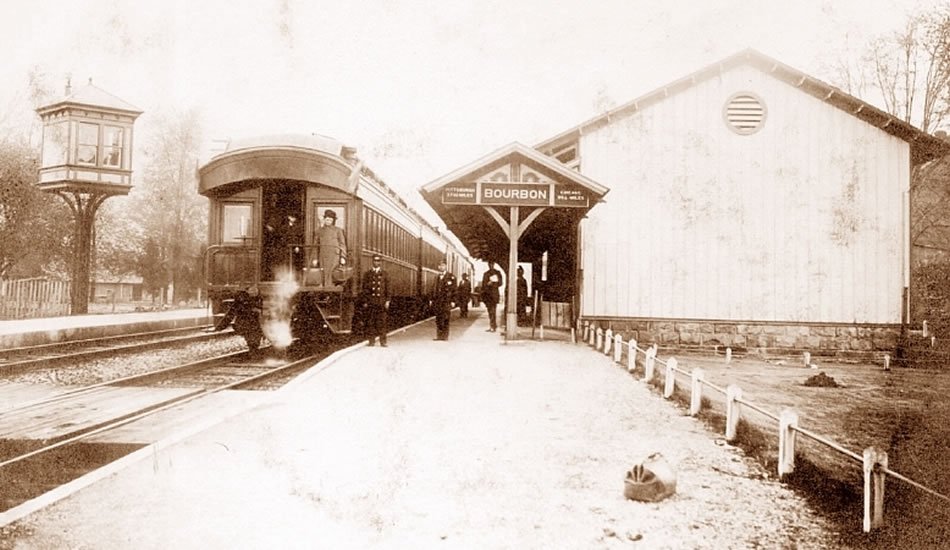 With the arrival of the railroad, Bourbon became a booming lumber town. From 1864 to 1867 over a thousand railroad cars of lumber were shipped each year. Early Bourbonites were proud of saying that Bourbon was the biggest stop between Fort Wayne and Chicago. The cutting of the trees for lumber was followed by clearing of the land for farming, and the community became known for its rich soil, well-bred livestock, and good farmers.

The people were strong believers and early churches were important to the people of Bourbon; however, the path was not easy. The records of local churches show such things as church burnings and bombings believed to be related to the causes of slavery and prohibition. Many stories of riots, brutal murders, arson fires, and dreadful accidents are recorded. The 1881 and 1896 Histories of Marshall County make interesting reading. Interest in education ran early and strong.

The 1881 History of Marshall County notes that in 1837 James Parks requested and was granted permission by the commissioner for his son, John F. Parks, to attend Indiana College at Bloomington for two years. In 1871, Bourbon College was established, but the public schools moved into its building in 1877. Bourbon history shows much cultural interest with newspapers, clubs, bands, and orchestras. The Bourbon Cornet Band was established in 1866. 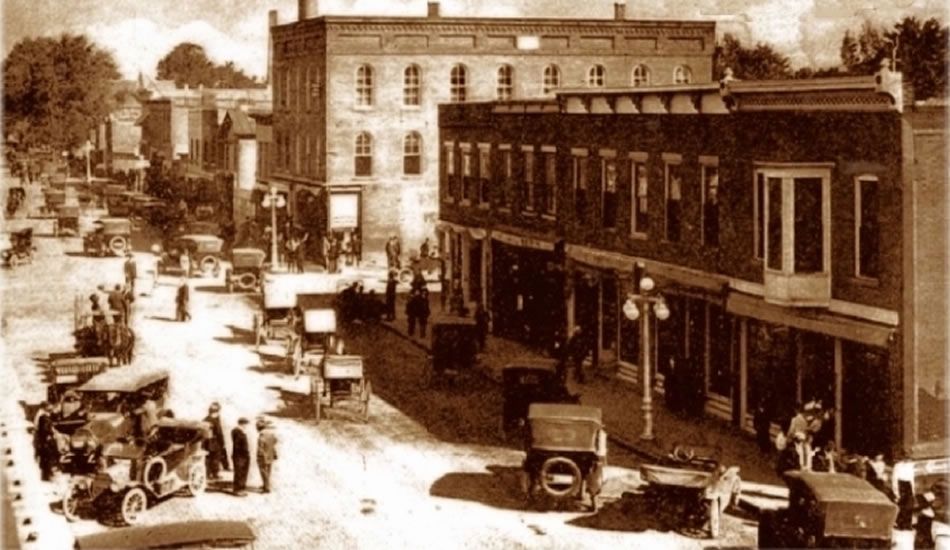 Interest in fire protection has always run high. In 1875, the Vigilant Hook and Ladder Company were formed. Other fire fighting organizations followed and continue to this day. Bourbon is known for its excellent fire department and EMS.

Bourbon grew into a fine community with good professional services, businesses, and industry, but not without a great deal of giving by many people. Today, there are no Weans in the Bourbon phone book, but if you go to the southeast corner of the Parks/Odd Fellows Cemetery, you will find the Wean monument and learn that both their sons died in the Civil War.

If one thing symbolizes the town of Bourbon above all else it is the Old Town Pump. Bourbonites are very proud of the memorial to the pump that now is located in Sit Park on the corner of Old US 30 and Main Street. The memorial represents the original wooden pump. The dedication reads:

IN REMEMBERANCE OF THE OLD TOWN PUMP
ONCE LOCATED HERE ON THIS CORNER
THIS MEMORIAL WAS SPONSORED AND
ERECTED BY THE SOUTH BEND BOURBON CLUB
DEDICATED JUNE 30, 1929

Please fill out the form below to get in touch with the Town of Bourbon.